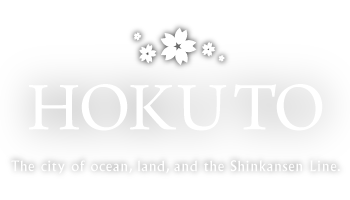 This multipurpose facility is located within the same premises of Shin-Hakodate Hokuto Station serving the Hokkaido Shinkansen Line.

The Hokuto City Tourist Information Center, a rest area with café, and a souvenir shop and gallery are available to visitors. 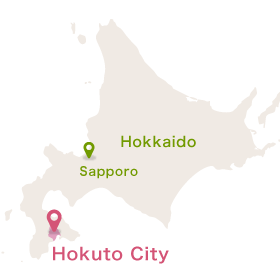 Immerse in Hokuto’s nature throughout four seasons.
Fascinating gourmet feasts from the sea and the mountains
and people’s smiles await you here in Hokuto.

Hokuto is a city located on the Oshima Peninsula in southern Hokkaido.

It was formed in 2006 after the merging of Kamiiso Town and Ono Town as Hokkaido’s 35th city.

Blessed with fertile soil and the warm climate of southern Hokkaido, the city is going through subtle yet bustling changes in the fishery, agriculture, commerce, and industry. From seafood, such as surf clams and oysters caught from the ocean adjacent to Tsugaru Strait, special A-grade rice, Fukkurinko, tomatoes, and other farming products to Houki Temple’s Shidare weeping cherry blossoms and the cherry blossom-lined street at the Ruins of Matsumae Clan Hekirichi Jinya, Hokuto City is filled with natural attractions. Above all, Hokuto’s friendly people await you with warm smiles.

In 2016, the Shin-Hakodate Hokuto Station opened to bring more vibrancy to the city.

Why not paying a visit or two, or many more to Hokuto City?